I was discussing AWS VPC networking and how network traffic come in/out to a VPC from different destinations with my team. Then later I though – lets put it on my blog – this will help others as well. I am discussing VPC gateways from a typical network engineer’s point of view.

There are many different type of gateways (network routers) on AWS VPC networking. Each of them have different roles – you put together different gateways to make a complete solution. Gateways are key components of a routing table – here I will show all the gateway items available on a “VPC routing table”. 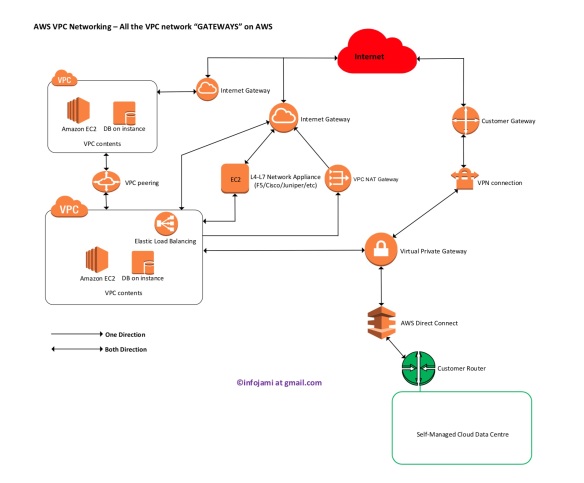 Lets discuss the key attributes (what are they? what they can do?) of the VPC gateways:

i. Virtual Private Gateway (VGW-nn)
This is a multi-purpose network gateway appliance provides in/out routing to a VPC. Key attributes of VGW:

There are lot security requirement scenarios where you allow internet access for systems/servers only via NATGW; no inbound are permitted and local systems are kept fully local only.

v. Layer4-Layer7 network appliances as Gateway
These are basically an EC2 instance with 2 or more NICs providing network connectivity.
Key attributes are following:

In the next part I will be discussing VPC “subnets” and “routing tables” which are capable to cater complex segregated routing requirements on AWS platform.

When I started working with AWS DirectConnect few years ago – I was a bit confused about from where to start.

If you are new to the Cloud world – probably you will believe that Cloud infrastructures are built without the help of Network Engineers! – because nobody (most of cloud marketing articles) wants to talk about them; Cloud is all about applications – no networking is required!

Being a network engineer – I was thinking is this the end of world for a network engineer? Actually, this is the beginning. I have seen so many poorly designed VPC networking with lack of security, segregation and control. Well, why this happening? Because the guys built these infrastructures are not experienced Network Engineer; they have computing skills obviously as they are DevOps and Application Developers, it’s like asking suggestions from a skin specialist for heart issues – as they both have same medical bachelor’s degree.

So when I started working on implementing AWS DirectConnect – my mindset was I am going to learn a hell lot of coding and some “brand new” ways to implement data/IP network. I started reading AWS DirectConnect documents supplied by AWS – https://aws.amazon.com/documentation/direct-connect (also VPC networking documents http://docs.aws.amazon.com/AmazonVPC/latest/UserGuide/getting-started-ipv4.html). At the end what I found is – its the same old wine in a new bottle and also with a brand new label with few extra utensils to handle it.

Here is the summary of AWS DirectConnect network components & concepts from a regular network engineer’s perspectives and surely these are very “common knowledge” and nothing very new or unknown to worry about.

Part 1: Why use AWS DirectConnect?

Q1. Why we need AWS DirectConnect(s)?
Ans: To have an inter-connect between (a)self-managed infrastructure and (b)resources on AWS such as Virtual Private Cloud, AWS S3; Hybrid cloud is getting popular, companies these days wants to integrate self-managed cloud platform (infrastructure) with AWS or other (Azure has similar network connection offerings).

Q2. Well, my company or client needs AWS DirectConnect. How can I get a direct connect? Where can I get this?
Ans: AWS DirectConnects are now available to many data centres across the globe these day. Check out at AWS web site for availability within your preferred data centre https://aws.amazon.com/directconnect/details/; they might be already having a presence in your data centre.

Q3. OK – I got it. Now I want to connect to AWS DirectConnect. From where to start? What are the available options?
Ans: There you go! First thing is you need to submit a DirectConnect request through AWS Console; based on your request AWS will send you a Letter of Authorization – Connecting Facility Assignment (LOA-CFA) for your cross-connect to your rack the in the data centre; AWS will also allocate a network port/interface for you on their end for this cross-connect. The data centre guys will do the physical cross-connect cable run for you. Please go through question Q4 to Q8 to get an understanding of what type of physical connection you will be ordering.

Starting from here it’s all about the “same old IP networking”.

Q5. What type of network cable do I need to use?
Ans: For both the 1Gbps and 10Gbps – it is “single mode fibre optic” cable.

Q7. What else need to know about the network interfaces?
Ans: The interface must support IEEE 802.1Q VLAN tagging. Actually you will be creating “tagged” logical interfaces based on the physical interface. This is just like connectivity between two Layer3 switches/router (one is your L3 switch/router – other one is AWS managed) so that you can have many logical VLAN interfaces. If you use layer 2 switch for this connectivity, you must need a router connecting to your switch and you deliver the same VLAN tag number to the router interface (the VLAN tag id you share with AWS).

Q8. I want to have more than one DirectConnect physical interfaces – can I use LAG? What are physical connectivity options to have more than one DirectConnect?
Ans: AWS recently started supporting LAG that use LACP. You can also use L3 ECMP (equal cost multi path – routing) load balancing & link failover with BFD (Bi-Directional Forward Detection for quick link fault detection). It’s your choice and business requirements, which one to choose “L2 LACP” or “L3 ECMP”. AWS LACP LAG is active/active solution.

Q9. Ok – now I know about the physical connectivity; what about the traffic forwarding and routing between AWS and self-managed network?
Ans: Regarding routing – AWS does support “ONLY” BGP. Since you are connecting to AWS which is a different ASN – the BGP type here is EBGP.

Q11. What do I do to see my BGP advertised networks in the VPC?
Ans: You need to create virtual private gateway (VGW) on AWS web admin console and attach it to your VPC. You can have one (01) VGW per VPC; your VGW is just a network routing virtual appliance that manages external IN/OUT traffic routes to your VPC. There is an option called “route propagation” within VPC routing table – turn this on, this will show all the routes propagated via BGP.

Q12. Can I have 2 x DirectConnect working together to have load balancing and redundancy?
Ans: Yes you can. You have two options – (i)one is LAG which use LACP active/active – this is a layer 2 solution, (ii)other option is Layer3 ECMP. Regarding ECMP, by default AWS use ECMP over BGP advertised router to send traffic across all the available active virtual interfaces (from AWS >> to you). Regarding sending traffic from your end to >> AWS, create your own ECMP policies via BGP advertised routes; this can be done using routing policies telling your router/firewall to use all the active virtual interfaces for the same destination (destination is AWS) IP subnets. AWS does support BFD (bidirectional forward detection) to provide fast network fault detection and convergence.

When using ECMP, one important thing is – if your DirectConnect terminating device is non-SPI (stateful packet inspection) packet based router – then they will send/receive packets from multiple interfaces without having any issue. However, if your DirectConnect terminating device is a session based firewall (SPI/stateful firewall) it will drop packets which does not match existing session table entries for return path (as return path might be the other firewall or might be other network interface which might not belongs to the same security zone). If both the AWS DirectConnect interfaces terminates on to a same SPI firewall – then put both the interfaces (one interface is via DirectConnect X, other one is via DirectConnect Y) on to the same security zone; in this case firewall SPI return traffic will get matched in the session table and will have no packet drop; if the packet return path is a different SPI firewall – then you need to turn off SPI on both the firewalls for AWS DirectConnect traffic.

To have redundancy only (no traffic load balance), you can use BGP “AS path prepend” feature to tell AWS BGP peer to send traffic (from AWS >> to your network) via your preferred path only.

Q15. I don’t want all my VPC subnets (within AWS) to have route to self-managed network subnets?
Ans: Sure you can do this. First, create “subnets” those you don’t want to a have route to self-managed network > then create “routing table” and make sure “route propagation” is turned off – “associate” the same subnet here. You can do all these from the AWS web admin console.

Part 5: How to administer/control AWS networking

Q18. What are the available tools to manage/administer AWS networking?
Ans: This is very simple; initially you better use the AWS Web Console, once you get a good visualisation of AWS components/products, then start using AWS command line tool (AWS CLI) and AWS APIs. As a Network Engineer probably you already know a hell lot of command syntaxes, so you will find AWS CLI much easier.

Where do I start with network automation using Ansible as a “Network Engineer”?