Cisco discontinued “spanning-tree pseudo-information” starting from NXOS version 7.0(3)4(1) on the 9000 platforms. So what is the solution for Nexus vPC and non-vPC VLANS on the same platform (hybrid)? Is it no longer going to be supported on NXOS/9000 platforms?

Although hybrid is not recommended vPC design for “aggregation layer” but you find a lot scenarios where you need to have both vPC and non-vPC within the same platform (mostly in mid-size data centres; where you have a lot reasons you can’t deploy traditional ethernet switches; hence you have considered the Cisco Nexus platforms).

If you carry everything (both vPC VLANs and non-vPC VLANs) over the vPC peer-links (yes, vPC carry orphaned VLANs as well!) – in this case if there is any issue happen on the vPC peer links and that stops the vPC working, the downstream switches those are connected to the Nexus via non-vPC/non-vPC VLANs will stop forwarding frames due to STP (any STP – STP/RSTP/PVSTP/MSTP) blockage as they don’t have any information about what happened between the vPC peer Nexus switches in a vPC peer failed scenario.

Experts suggest that you should have an additional Layer 2 trunk port-channel alongside your vPC peer-link; this Layer 2 port-channel will carry non-vPC VLANs in case vPC stops working (whatever reason; could be a Nexus reboot during maintenance!).

Well, now you have setup a seperate Layer 2 trunk port channel for non-vPC VLANs and shutdown the vPC peer link to test it – but you found it is still not working as expected! STP is blocking the Layer 2 trunk link, whats the problem! Cisco used to have a solution for this called “spanning-tree pseudo-information“; as I have mentioned in the beginning Cisco discontinued this starting from version 7.0(3)l4(1) on the Nexus 9000 platform. So what is your option for this? Should you stop using Nexus if you don’t follow spine and leaf design?

Yes – there is an answer to this, there is a small trick to make this working! By discontinuing psuedo-information, Cisco basically makes it ever easier to configure; you need to do the following –

i. First, you need to set STP root priority for the VLANs to a lower priority number on one of Nexus switch (default priority is 32768, lower is prefer; this should be done on the primary vPC role Nexus switch) and leave STP untouched on the other Nexus switch (this is the vPC secondary role switch).

Without having the above configuration applied you will find STP is blocking the non-vPC Layer 2 trunk link even if the vPC peer-link is shutdown. Also in this example – the vPC primary role switch will be the STP “root bridge” because of lower priority configured (8192). 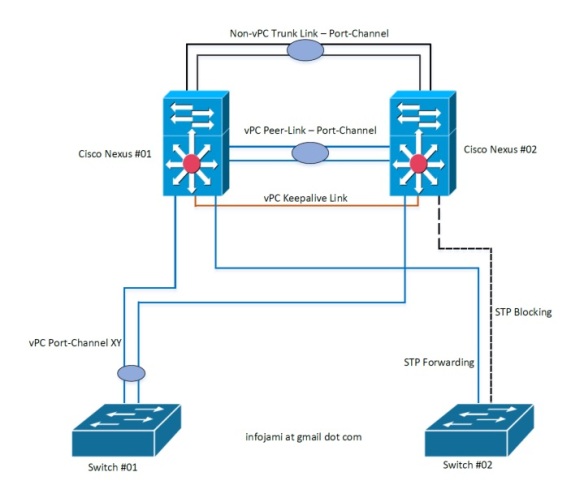